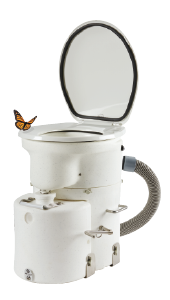 excellent, heavy duty marine construction, virtually no odor except for a couple of days on start up when it was just noticeable....They are the kind of company that I would like to do more business with, but probably won't have to.Roger A.

I purchased an AirHead about 5 years ago, and am still a happy user!Joseph H.

You have a great product and it definitely was a wise move on our part to install your system. Thanks so much for the great customer service you provide. We keep telling people about your toilet so hopefully you'll get some more Canadian orders.Mary Lou H. & Joan G.

I keep telling our customers about your system. We now have been using it for 8 years. We are doing the Baja HaHa this year. I'll make sure to let all the cruisers know about Air Head Toliet.Ari C.

Fit the new Air Head on Ganges yesterday and it's perfect! Pearson Triton 28

We have an old electric toilet with holding tank and just can't stand the odors. Really anxious to toss that thing along with its extensive smelly hoses. The airhead aboard our Southern Cross 31, Scoundrel, was the only odorless head I have ever encountered in over 40 years sailing! Thanks Again Ed M.

We've been using an Air Head composting toilet since 2002 and it has worked beautifully. No holding tank to deal with, no smelly hoses, no problem proving we conformed to the "absolutely no discharge" rules in areas like the Great Lakes and Lake Champlain.Mary & Paul S - Cruisers